John Halamka calls himself the Forrest Gump of healthcare IT.

“By utterly random chance, I’ve been at every major event that has shaped the industry since the 1960s,” he said.

It might be just a touch more deliberate than that. Halamka taught himself computer engineering as a kid, built an early version of a patient portal, and wrote the code for an EHR while a medical resident in the 1990s.

Whatever he’s working on, it’s all to further the same goal: “Since the ‘90s, my whole focus has been making organizations work better, whether that’s the hospital or the medical school or the young faculty that I supervise,” he said.

That’s meant occupying a series of innovation-related roles. Currently, as of Beth Israel Deaconess Medical Center’s brand-new merger with Lahey Health, Halamka is the executive director of the Health Technology Exploration Center. Regardless of his job title, there’s no getting around it: he’s one of the most influential figures in healthcare IT today.

WELL sat down with Halamka to learn more about his problem-solving process, his advice for getting others on board with new ideas, and where that all-consuming interest in technology originated.

Your training and background are as a clinician. How did you fall in love with technology, and why did you decide to make it your life’s work?

I moved to Torrance in 1968. Torrance was a place where you combined industry, commercial establishments, and residential [neighborhoods] into a single community. So I, as a young kid, was able to go to businesses that offered technology and go through their dumpsters, and I picked throw-away electronics out of the dumpsters.

I was able to teach myself discrete circuitry, resistors, capacitors, inductors, and then integrated circuits, and then microprocessors. And I started designing systems and built a computer for a hospital, Harbor-UCLA, to acquire signals from the eyes and ears of the disabled and provide digital reports about their functioning.

Then, though I did major in political science, economics, and microbiology, I was running a software company from my dorm room while I was at Stanford. Back then, it was considered very weird. Now, of course, everybody does it.

I’ve always been on the parallel tracks of technology and biology. I’ve found that, when you work at the intersection of two fields, your promotion goes much faster than if you work in just the core of a single area.

There are so many issues in the industry right now—issues of inequity and lack of access, spending and transparency. Why is healthtech the right thing to focus on?

Technology is just an enabler. I was in India a few weeks ago, working with the Gates Foundation on a tracer exercise. (In this case, the word “tracer” means you go into the field and you ask yourself, “What are problems to be solved and how can we best solve them?”)

What I found in Northern India in Bihar State, which is the area in India with probably the most disease, pollution, and poverty, [was that] they didn’t necessarily have good access to medical care, but they had good access to 4G, and cell phones were $35.

And so coming out of my week in India was a plan for, potentially, how Gates could fund a cell phone-connected machine-learning approach to diagnosis and treatment that would extend the ability of doctors in India to reach the more rural areas.

If you give me a business problem, we’ll solve that however is best appropriate. And if there is a technological solution or an emerging idea that can really radically transform a social issue, then I’ll definitely choose the technology approach. But I’m more into solving a problem as opposed to implementing a technology per se.

You’ve argued that the future of healthcare involves focusing on wellness, not sickness. How can health systems help patients make that transition? What tools and approaches should they use?

Therefore, what they’re recognizing is, “I can’t keep you healthy in your house unless I know how you’re doing. Are you walking? Eating? Taking your medications? Are you appropriately warm or cold?”

It’s pretty clear that the incentives are aligned appropriately, and that using these digital tools to assist a patient and family with wellness is going to be the next generation of healthcare delivery as opposed to more hospital beds.

Doctors frequently complain of feeling disconnected from patients—in no small part due to the EMR. Does technology have the potential to rehabilitate the relationship between doctor and patient or bring us closer together? How? 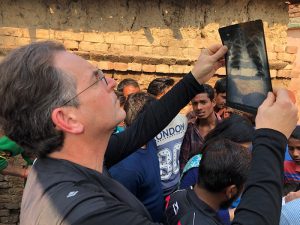 Do you remember Google Glass? Google Glass was an interesting idea but not so well-engineered. It had a short battery life, didn’t have security patches, so it didn’t ultimately catch on. (Although it’s being revised and potentially, we’ll see it rise again.) Beth Israel was the alpha test site for Google Glass and healthcare.

We used Google Glass as a heads-up display to show the patient’s history, medications, problem list, care plan, all the rest. What happened as a result of that study? The patient said, “Oh my God. That was wonderful. The doctor looked at me instead of a computer.”

In a recent article in Harvard Business Review, you said that “third-party innovators have the most potential to dramatically improve both the user experience of clinicians and the health of patients.” But there are a wealth of options out there. How should health systems decide which to employ?

In the world of startups, there is often a lot of hype. There’s a lot of overpromise and under-delivery. And so what you have to be careful of is what I call present-future tense: “We have a product that will.”

Don’t buy the PowerPoint of brochureware. Buy results based on personal experience of going deep with companies and maybe even do some co-development.

Hospital systems are famously slow to accept change. How do you convince your colleagues to go along with new ideas, accept new processes, and adopt new attitudes?

Do you remember Rahm Emanuel? He was Obama’s chief of staff. And his brother was Zeke, who wrote a fair amount of the Affordable Care Act. Anyway, these guys basically said, “Let no urgency go unused.” What do I mean by that? Imagine a hospital system has a privacy breach—and it happens. No matter what you do, people, unfortunately, are human. They’ll click on that link, and they’ll introduce ransomware. Or they’ll find a USB drive and put it in their computer. If you have a major malware or ransomware problem, what a great time to bring in enhanced security software or partner with a company working on new security innovation.

Or let’s imagine a patient has a bad outcome and it’s very public. What a wonderful opportunity to think about artificial intelligence or tools that can better watch what a patient’s progression might be through a hospital and raise a red flag if it’s going off-plan? Use every sentinel event as an opportunity for change.

Then a second bit of advice: In a healthcare system, you will find that there are a fair number of strongly opinionated people. If you tell the leaders of a healthcare system that, by implementing a technology, we will satisfy some of these more local people who might also be naysayers, they will say, “That sounds really great.”

This interview has been edited and condensed for clarity.