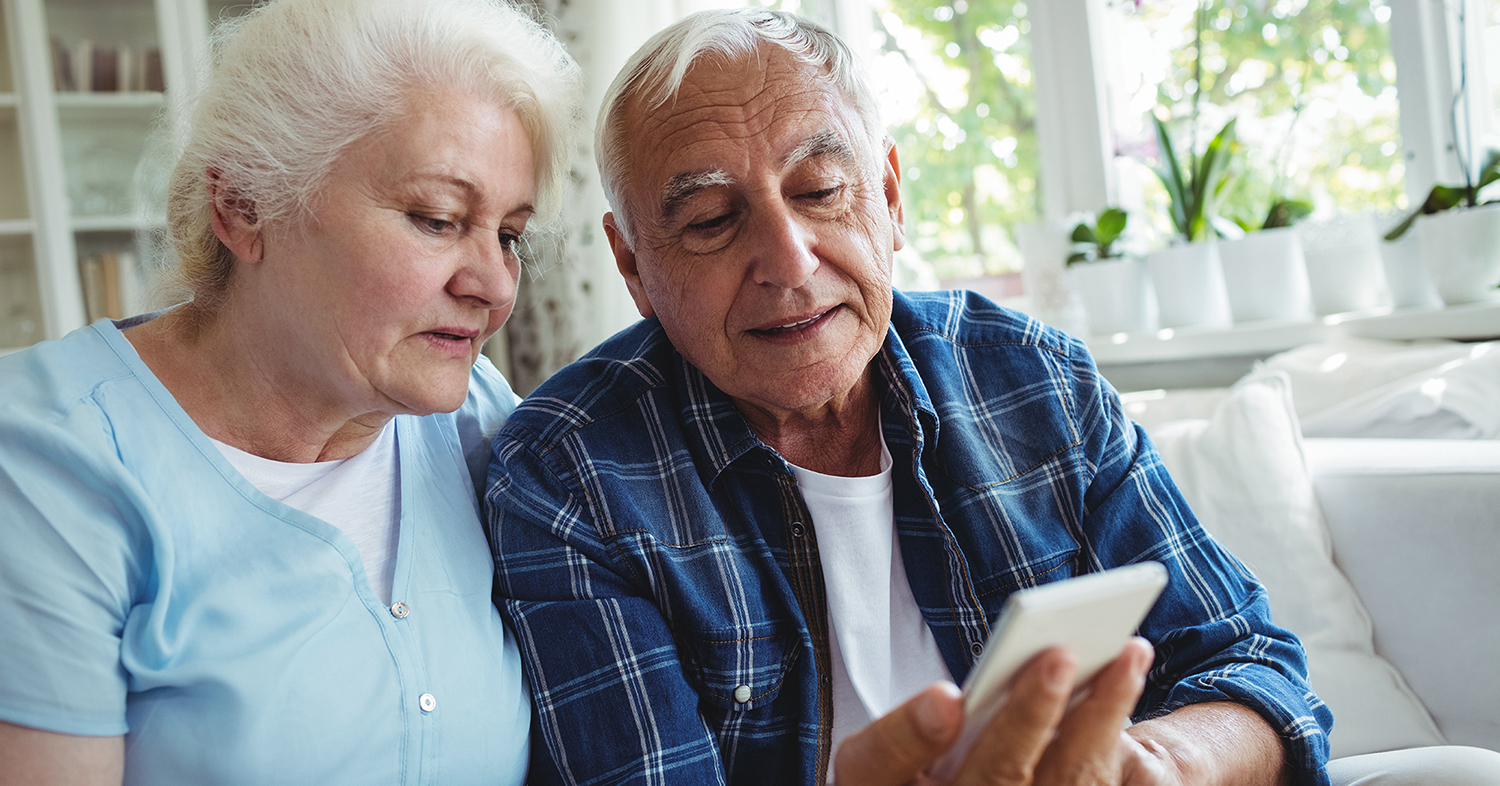 Texting IS your grandparent’s technology…and they are using it.

When Alexis Kuerbis applied for a grant to study seniors and texting, she was shocked by reviewers’ reactions. “Basically, I ran into a bunch of ageist and out-of-date attitudes,” said Kuerbis, a professor of social work at Hunter College. “They were saying ‘Older adults don’t use mobile phones. You’re never going to get them to engage in any technology.’”

But that wasn’t Kuerbis’s experience. In her 2017 study that involved using text messaging as an intervention for problem drinking, seniors were among the study participants, and Kuerbis found, “People who were older were very tech-savvy and able to engage in an intense assessment via smartphone,” she said.

COVID forced seniors to use technology

More recently, COVID-19 played a large part in forcing many older Americans to use technology in order to receive care during the pandemic. A University of Michigan poll found that in May 2019, only 4% of older adults had participated in telehealth, but in June 2020, this number rose to 30%. Subsequently, the interest level of seniors in technology continues to rise. In 2020, 64% reported they were comfortable with video conferencing technologies, up from 53% in 2019. Increasing from 58% in 2019, 72% of older adults now say they are interested in continuing to use telehealth to connect with a provider they had previously seen.

“In general, older adults are pretty open to using technology,” said William Chopik, a psychology professor at Michigan State University. In 2016, Chopik studied about 600 older adults with a median age of 68 to find out more about their use of social technologies like SMS messaging, emails, video conferencing, and Facebook. The seniors in the study didn’t just have positive feelings toward the social technologies they used; they were also positively impacted by them. “It makes them feel less lonely, and, as a result, makes them happier and healthier,” Chopik explained.

Facts about seniors and texting

In 2018, an AARP study found that 86 percent of Americans over age 50 communicated with text messaging. For those ages 50-69, texting had surpassed email as their preferred method of communication. The study also discovered adults in their sixties who owned tablets and smartphones were the most likely to use their devices to manage medical care than those in their 50s or 70s.

“In every study, I’ve ever seen about technology being applied to older adults and seniors for healthcare, across the board, they tend to like it. Separately, they also tend to get excited about it, because it feels fun and new,” said Kuerbis.

These findings are not surprising since smartphone usage is highly popular among seniors. In the AARP 2020 Tech Trends of the 50+ survey, 86% of people aged 50 to 59 were smartphone users, 81% for those aged 60-69, and 62% for those aged 70 and over. The numbers around seniors and texting have been consistently growing. In fact, a 2021 study found one in three Americans over 65 prefer texting to phone calls.  Seniors reported they enjoy texting, using emojis, and social media as much as their grandkids, viewing these activities as a great way to bond with the younger generations.

“We think of texting as a millennial thing, but people of all ages engage in it,” said Aaron Hagedorn, a gerontology professor at USC and widely respected expert on older populations. “Every person is the same, regardless of age: We all want to engage socially.”

Where does the stereotype, “older people and technology don’t mix” come from? Kuerbis says it was true some generations ago when people went their entire professional lives without using digital technology. Times have changed. “If you think about it, the generations that have aged in the past 30 years aged at a time when the world was being forced to engage in technology in new ways,” she explained.

Now when we talk about older adults, we are referring to everyone over the age of 50. That’s a huge and highly diverse population—one that covers people at the height of their careers as well as those who have been retired for decades. And even among true seniors—those 65 and older—technology use comes pretty naturally.  Hagedorn said, “Among the population of people 65 and up, 80 percent of them would have no problem using a standard app. Another 10 percent of them could handle it with some assistance from others or on a tablet. The ones who can’t manage it are in a real minority.”

Seniors texting is patient empowerment in the growing AgeTech trend

Seniors and texting are seen as a useful tool for patient empowerment, and as a part of the fast-growing trend of “AgeTech.” Forbes Magazine defines “AgeTech” as technology focused on helping seniors age in place and improving their quality of life with devices that assist them, their families, and their caregivers. AgeTech was a big theme at CES2020, the popular annual consumer electronics show where companies reveal the latest products in new technology. There were several age-tech presentations that focused on how tech can help seniors perform health monitoring at home and help their caregivers reduce burnout.  AARP predicts that by the end of the next decade, seniors are projected to spend $84 billion on AgeTech products.

As a part of this trend, text messaging is being used in various innovative ways for patient engagement and communications. In healthcare, text messaging has successfully been used to engage older adults in everything from appointment reminders to medication management. “Text messaging is the least invasive and the most accessible [technology] across age groups. It takes the least amount of effort for older adults to use,” Kuerbis explained.

In the field of low back pain (LBP), a study found that text messaging was used as an intervention to remind patients to exercise. Patients reported that they appreciated the texts which often reminded them to adhere to their exercise plan and how to do the exercises correctly. Due to texting technology, providers can now use programs like COVID Watch to monitor elderly patients who are at risk of complications from COVID-19 in their own homes. COVID Watch is a nonprofit, open-source program that uses text messaging to consistently check in with the patient. If the person needed help, a simple text would alert their provider to call them immediately.

Health systems should now no longer be surprised that not only do seniors text like other age groups, but they are also expecting to be able to text as a way of communicating with their healthcare providers.  For example, located in a popular retirement destination, California’s Coachella Valley, Eisenhower Health was worried that their biggest challenge would be to get their largely senior patient population to use text messaging. However, they discovered many seniors had experienced texting with their previous healthcare providers before moving to Coachella, and now expected the same level of service and communication. “What we found is that seniors text more than people believe, especially those who are moving here to retire from other areas,” said Vianette Hernandez, Project Manager, Patient Ambulatory Access.

Monterey Spine & Joint (MSJ), a large physical therapy clinic in Monterey, California experienced a similar situation. To help lower call volume and increase call answer rates, MSJ used texting as one way to communicate with their patients. The clinic was worried that their largely senior patient population would refuse to use texting, but they were pleasantly surprised. As Chief Operating Officer Jason Wilfong explains it, “What we found out is that a lot of them already used texting with their kids or grandchildren, so we’ve been pretty impressed with the amount of Medicare patients who actually want to text!” ♥